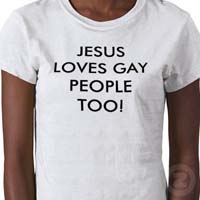 These T-shirts dot many gay/lesbian events. I absolutely agree with it. I believe "For God loved the world so much that he gave his one and only Son, so that everyone who believes in him will not perish but have eternal life."

Yesterday our president came out in support of gay marriage. This sort of high-profile boost bolsters the cause no doubt. Many in the Christian community have emotional reactions to such a "slap in the face" to our perceived moral society. So where should the true Christ-follower stand?

We should stand in favor of homosexuals, of course! We should be living among them. We should love them, support them, and yes, tell them the truth. I know people I love are gay. I also know that some of them believe that it's ok. Some of my friends do go to the scripture to defend their lifestyle. Part of loving, I believe, is being truthful even when it hurts or goes against the opinion of your family or close friends.

I suppose the first step is deciding whether or not you trust and honor the Word of God. I do. I believe it is infallible because the God who created and sustains the universe is certainly able to preserve a book.

All Scripture is inspired by God and is useful to teach us what is true and to make us realize what is wrong in our lives. It corrects us when we are wrong and teaches us to do what is right." — 2 Timothy 3:16

So does the Word support homosexuality? Much of the theology behind pro-gay teaching, to me, lacks one fundamental — common sense. I don't want to be harsh, but most of the time the bible just means what it says. When we try to perform scriptural gymnastics to prove a point, we risk missing the simple message. We miss what the words are actually saying. The Apostle Paul dealt plainly with homosexuality.

But God shows his anger from heaven against all sinful, wicked people who suppress the truth by their wickedness. They know the truth about God because he has made it obvious to them. For ever since the world was created, people have seen the earth and sky. Through everything God made, they can clearly see his invisible qualities—his eternal power and divine nature. So they have no excuse for not knowing God.

Yes, they knew God, but they wouldn't worship him as God or even give him thanks. And they began to think up foolish ideas of what God was like. As a result, their minds became dark and confused. Claiming to be wise, they instead became utter fools. And instead of worshiping the glorious, ever-living God, they worshiped idols made to look like mere people and birds and animals and reptiles.

So God abandoned them to do whatever shameful things their hearts desired. As a result, they did vile and degrading things with each other's bodies. They traded the truth about God for a lie. So they worshiped and served the things God created instead of the Creator himself, who is worthy of eternal praise! Amen. That is why God abandoned them to their shameful desires. Even the women turned against the natural way to have sex and instead indulged in sex with each other. And the men, instead of having normal sexual relations with women, burned with lust for each other. Men did shameful things with other men, and as a result of this sin, they suffered within themselves the penalty they deserved.

Since they thought it foolish to acknowledge God, he abandoned them to their foolish thinking and let them do things that should never be done. Their lives became full of every kind of wickedness, sin, greed, hate, envy, murder, quarreling, deception, malicious behavior, and gossip. They are backstabbers, haters of God, insolent, proud, and boastful. They invent new ways of sinning, and they disobey their parents. They refuse to understand, break their promises, are heartless, and have no mercy. They know God's justice requires that those who do these things deserve to die, yet they do them anyway. Worse yet, they encourage others to do them, too. — Romans 1:18-32

To those I love, today I have to "come out." I feel like I have to warn you of the spiritual danger in indulging the flesh in a homosexual lifestyle. It may be socially acceptable. It may be legal. Our president may think that it is just. But the Creator of earth and sky declared it wicked.

But I can't stop there. To my straight friends: the way you have undermined and misused marriage has led us down this path. You throw the phrase around "One Man + One Woman = Marriage" but you date recreationally, go through multiple sexual partners, and support divorce. Go back to Malachi 2. The warning for protecting God's Eden plan for the home is stated very clearly.

Judah has been unfaithful, and a detestable thing has been done in Israel and in Jerusalem. The men of Judah have defiled the Lord's beloved sanctuary by marrying women who worship idols. May the Lord cut off from the nation of Israel every last man who has done this and yet brings an offering to the Lord of Heaven's Armies.

Here is another thing you do. You cover the Lord's altar with tears, weeping and groaning because he pays no attention to your offerings and doesn't accept them with pleasure. You cry out, "Why doesn't the Lord accept my worship?" I'll tell you why! Because the Lord witnessed the vows you and your wife made when you were young. But you have been unfaithful to her, though she remained your faithful partner, the wife of your marriage vows.

When it comes to seeking God's will and His way, I am a purist. Since Adam and Eve ushered sin into the world, everything God intended changed. (Read Romans 5:12-21 to dig into that). Sin brought death, physical and spiritual, into our world. The design of our Holy Father was corrupted. Whether you are gay or straight, it is clear we don't live in Eden anymore. But does it have to be that way? Do you we have to settle for corruption? Do we have to live according to the will of our flesh and the law of sinful man? No.

Yes, Adam's one sin brings condemnation for everyone, but Christ's one act of righteousness brings a right relationship with God and new life for everyone. Because one person disobeyed God, many became sinners. But because one other person obeyed God, many will be made righteous. God's law was given so that all people could see how sinful they were. But as people sinned more and more, God's wonderful grace became more abundant. So just as sin ruled over all people and brought them to death, now God's wonderful grace rules instead, giving us right standing with God and resulting in eternal life through Jesus Christ our Lord. — Romans 5:18-21

There is great freedom in full surrender to Jesus Christ. That seems like foolishness to the world. How can I have freedom by becoming a slave? I feel inadequate to describe it. The freedom comes because He is so holy and so full of love. His of mercy and grace offer total forgiveness as He extends a healing hand. He gives redemption and salvation in place of death. We earned death with our willful sin against Him. Please consider the words of 1 Corinthians 6:9-20.

Don't you realize that those who do wrong will not inherit the Kingdom of God? Don't fool yourselves. Those who indulge in sexual sin, or who worship idols, or commit adultery, or are male prostitutes, or practice homosexuality, or are thieves, or greedy people, or drunkards, or are abusive, or cheat people—none of these will inherit the Kingdom of God. Some of you were once like that. But you were cleansed; you were made holy; you were made right with God by calling on the name of the Lord Jesus Christ and by the Spirit of our God.

You say, "I am allowed to do anything"—but not everything is good for you. And even though "I am allowed to do anything," I must not become a slave to anything. You say, "Food was made for the stomach, and the stomach for food." (This is true, though someday God will do away with both of them.) But you can't say that our bodies were made for sexual immorality. They were made for the Lord, and the Lord cares about our bodies. And God will raise us from the dead by his power, just as he raised our Lord from the dead.

Don't you realize that your bodies are actually parts of Christ? Should a man take his body, which is part of Christ, and join it to a prostitute? Never! And don't you realize that if a man joins himself to a prostitute, he becomes one body with her? For the Scriptures say, "The two are united into one." But the person who is joined to the Lord is one spirit with him.

Run from sexual sin! No other sin so clearly affects the body as this one does. For sexual immorality is a sin against your own body. Don't you realize that your body is the temple of the Holy Spirit, who lives in you and was given to you by God? You do not belong to yourself, for God bought you with a high price. So you must honor God with your body.

Today, I am not surprised by Barack Obama's declaration. I am not surprised, but I feel I also have to use my platform, no matter how small it is, to speak against the lies that he speaks. Yesterday he chose to oppose Jehovah God who spoke to His people Israel, "Do not practice homosexuality, having sex with another man as with a woman. It is a detestable sin." (Leviticus 18:22)

As you go forth today don't forget:

"For the Lord's sake, respect all human authority—whether the king as head of state, or the officials he has appointed. For the king has sent them to punish those who do wrong and to honor those who do right. It is God's will that your honorable lives should silence those ignorant people who make foolish accusations against you. For you are free, yet you are God's slaves, so don't use your freedom as an excuse to do evil. Respect everyone, and love your Christian brothers and sisters. Fear God, and respect the king." — 1 Peter 2: 13-17

I know this was longer than my normal writing so I'll summarize.