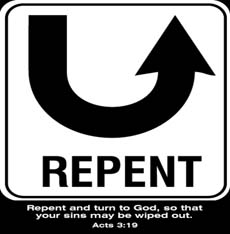 A person does not need to have listened to very much preaching — whether on the radio, television, or other places - to know that there are preachers who are telling people, "All you have to do to be saved is 'believe in Jesus'; 'accept Him as your personal Savior.'"

Some preachers have even been willing to affirm in public debate that a person is saved from his sins at the point of faith. Naturally this brings up quite a few complications, not the least of which is: If all a person has to do to be saved is to believe, he does not have to repent, or if he is saved at the point of faith he is saved before and without repentance. Not many are willing to say that God will save a sinner whether he repents or not, or God will save the impenitent. After all, it is "Repent or perish" according to 2 Peter 3:9, and God does "command all men everywhere to repent" (Acts 17:30).

Neither Reasonable nor Scriptural

The idea that repentance precedes faith is not only contrary to scripture but it is also contrary to reason. After all, how could a sinner repent of having sinned against God, when he doesn't even believe there is a God? Then, too, since sin is the transgression of God's law (1 John 3:4), before a person would repent of having transgressed God's law, he would have to believe that there was a God and that He had a law. He certainly would not repent if he did not believe in God, much less that He had a law that he had violated.

For example, consider Acts 2. Peter had preached about the crucifixion and resurrection of Christ. He concluded his sermon by saying, "Therefore let all the house of Israel know assuredly, that God hath made that same Jesus, whom ye have crucified, both Lord and Christ" (2:36). To "know assuredly" is to have the strongest kind of faith. After all, faith is the "assurance of things hoped for" (Heb. 11:1 ASV). Having told them first to have this strong assurance (faith), he, then tells them, "Repent and be baptized…" (Acts 2:35). Here we see faith preceding repentance. The claim that repentance always is mentioned prior to faith in the scriptures is not a true claim.

Even if this were a true claim that repentance is always mentioned prior to faith, it does not necessarily mean that it precedes it in fact. For example, we often say, "Put on your shoes and socks." We certainly do not mean that the shoes go on first and then the socks, do we?

Then, too, consider what Peter told the Jews in Acts 5:30, "The God of our fathers raised up Jesus, whom ye slew and hanged on a tree." Does this mean that the Jews first "slew" Christ, and then after they had slain him, they later "hanged him on a tree"? Certainly not. But the "slaying" is mentioned before the "hanging", but it certainly does not mean that it occurred in that order. And so it is with faith and repentance. Just because repentance may sometimes be mentioned before faith, it certainly does not mean that they occur in that order.

Passages Where Repentance is Mentioned before Faith

"The time is fulfilled, arid the kingdom of God is at hand; repent ye, and believe the gospel" (Mark 1:15).

"Testifying both to the Jews, and also to the Greeks, repentance toward God, and faith toward our Lord Jesus Christ"" (Acts 20:21).

"Not laying again the foundation of repentance from dead works, and of faith toward God" (Heb. 6:1).

While it is true that the word repentance is mentioned in these before the word faith, please notice that in not one of these passages is it repentance and faith toward the same person or thing.

Look at Acts 20:21. It is repentance toward God and faith toward Jesus Christ. In Heb. 6:1, it is repentance from dead works and faith toward God. It also needs to be remembered that in this latter passage as well as Matt. 21:32 and Mark 1:15, the address is made to people who were Jews; people who already believed in God. He certainly was not telling them to begin to believe in God. When the Bible tells us that "Abraham believed in the Lord" (Gen. 15:6), it certainly does not mean that he then believed in God for the very first time. Before we could conclude that repentance does in fact precede faith, scripture would have to be given that would show that one must repent toward Jesus Christ and then believe in Christ. And also show that that is the way it must be. But such a passage has not been given, nor can it be shown that the sequence must come that way.

The effort to get repentance before faith is an unscriptural effort. Not only because it reverses the proper order, but also because it is usually done to try to refute the Bible's teaching that a penitent believer is saved after he is baptized scripturally and not before. Jesus said, "He that believeth and is baptized shall be saved" (Mark 16:16). Let's not only believe that, let it also be properly acted upon.